An established Japanese restaurant, Tatsu Japanese Cuisine's ambiance emphasises on dark timber woods to complement the touch of sea cobalt blue and white colour palettes for an atmosphere that pleases senses and appetites. The restaurant also features a private Sake bar surrounded by floor-to-ceiling glass windows that offer a breath-taking view of the beautifully landscaped garden and cascading waterfall. The bar serves more than 20 types of Sake, Shochu and wine, while Tatsu’s Sushi Bar provides an abundance of the freshest seafood flown in twice a week from Japan.

Ala Carte
Make A Reservation 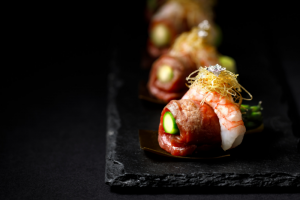 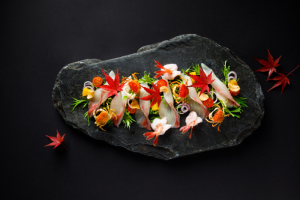 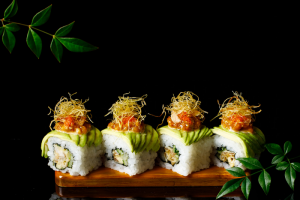 Every Room has A Story

Named after the Japanese flowers of Autumn, each of our private dining rooms are decorated in the delicateness of Japanese aethetics.

The Fuji flower, also known as Wisteria, blooms during late April to early May. Named after the beautiful flower, the room seats up to 10 people and is decorated in contrasting shades for an elegant touch.

Named after Hagi, also known as the Bush Clover flower, the room is designed with in contemporary shades for a sophisticated touch and seats up to 10 people.

Also known as the Chrysanthemum flower, the Kiku room represents Japanese dining in modish styles and seats up to 10 people.

Tsubaki, also known as Camellias, were first cultivated in Japan as well as China. Named after these evergreen shrubs, the room is finished in refined decor and can seat up to 18 people.

From humble beginnings to landing the title of Head Chef at Tatsu Japanese Cuisine, Chef Tommy Kuan Soon Seng is an exemplary chef with more than two decades of culinary experience.

Chef Tommy Kuan Soon Seng has a combined culinary experience spanning over two decades since his first step in the culinary world as an apprenticeship with a Chinese Restaurant. Inspired by his brother, Chef Tommy fell in love with cuisine and joined several Japanese restaurant including Nadaman Japanese Restaurant, Iketeru Japanese Restaurant and Benkay Japanese Restaurant. He was later appointed as the Head Chef of Tatsu Japanese Cuisine at InterContinental Kuala Lumpur in 2015. Known as a master in the art of Japanese cuisine, Chef Tommy has devoted himself to mastering his knife skills and preparation methods of various fish species, while invoking skills to infuse bold and subtle flavours into various seasonal catches. Eat to your heart's content on Teppanyaki, Yakimono and more. Bentley’s Pub is a traditional English-style watering hole in the heart of the business district and makes the perfect after-work venue f... Fringed between a tropical garden and a cascading waterfall, OneSixFive Lounge is an exclusive address to mingle and sip on our signature... Indulge in authentic dishes from our Chinese menu at Tao Chinese Cuisine, one of the best Chinese restaurants in Kuala Lumpur. Make your ...