Tao Chinese Cuisine is the epitome of dining in the heart of the city. Tao impresses connoisseurs with a refreshing blend of traditional recipes reinvented. Chef Kong is at the helm, bringing his creations to life using seasonal flavours to create a perfect blend of traditional techniques with modern presentation. 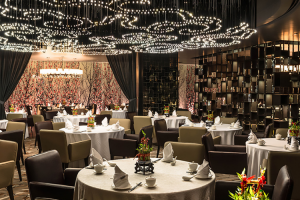 a story in every room

Tao houses six private rooms which are decorated to enhance a private dining experience. Named after dynasties in China -Han, Song, Tang, Yuan, Ming, and Qin - each room is intricately decorated to represent the significance of each ancestry.

Known as the Golden Age of cosmopolitan culture in Chinese history. The boundaries established by the Qin and maintained by the Han have more or less defined the Chinese Nation to the present day.

Heralding an age of administrative sophistication and complex social organisation, it was the first government in history to issue banknotes or paper money.

Regarded as the greatest age for progress and stability, literature flourished as scholars and poets gained prominence. With its vast army and mercantile network, it dominated lucrative trade routes along the Silk Road.

Established by Mongolian Kublai Khan as he conquered the lands to the south, it was the first foreign dynasty to rule China. He promoted trade with the West, and is known to have entertained the Venetian trader Marco Polo at his court.

A dynasty of exploration and development, as the emperor declared Beijing as the new capital of China, demoting the traditional Nanjing from its power base. Built the greatest navy in the world under eunuch commander and explorer Zheng He, and developed the forbidden city as the palatial residence of the emperor.

First Imperial Dynasty of China, consolidating the seven warring states into an Unified China. It embarked on a number of ambitious projects in its short existence, the greatest being the northern wall, or better known as the Great Wall of China

TAO All You Can Eat

Have your fill of Chinese cuisine with our InterContinental Kuala Lumpur TAO - All You Can Eat. Choose from an array of delectable delica... A traditional English pub – the perfect place to meet after work for food and drinks with friends and business associates. Bentley’s offe...

OneSixFive is a redefined luxury, offering a refreshing respite from the day’s activities. Choose to enjoy the tapas-style menu offerings... Located at the lobby level, Serena Brasserie is a stylishly designed restaurant that offers guests a bountiful buffet spread of local and... Tao Chinese Cuisine is the epitome of dining in the heart of the city. Tao impresses connoisseurs with a refreshing blend of traditional ... Tatsu Japanese Cuisine combines a subtle blend of Japanese aesthetics with a contemporary, minimalist design. Tatsu is an award-winning r...